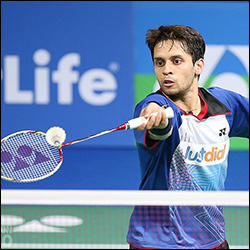 Parupalli Kashyap has been a force to reckon with in the Indian Badminton circuit. He created history by reaching the Quarterfinals of men's singles at 2012 London Olympics, becoming the first male player from India to do so.

Born to Uday Shankar and Subhadra Shankar in Hyderabad, he had to switch cities quite frequently when he was young because of his father’s transferable job. He started training under S.M. Arif in Hyderabad, joined Prakash Padukone Academy while in Bangalore before finally making the Gopichand Academy his home.

Despite being diagnosed with Asthma in 2004, he didn’t let this complication come in the way of his badminton career and went on to chart history - from being the 2005 Junior National Champion to being the Gold Medallist at 2008 National Games. He won the bronze medal at the 2010 Commonwealth Games and scalped 3 Top 20 players in the world. He also played a pivotal role in India winning the silver medal in the Team Championships at the 2010 Commonwealth Games.

A quarterfinal berth at the London 2012 led him to the World Ranking of 19. An Indian Open Grand Prix Gold 2012 made sure his ranking rose to 14 before he ended the year with a career best ranking of 6. In the same year, he was conferred the prestigious Arjuna Award for his achievements on the court.

At the 2014 Commonwealth Games in Glasgow, Kashyap became only the third Indian after Syed Modi and Prakash Padukone to win an individual Gold medal. He defeated Derek Wong of Singapore 21-14, 11–21, 21–19 and won the historic gold.

Losing on the Rio 2016 spot by a whisker, Kashyap’s eyes are all set on Tokyo 2020. He is more determined than ever to be the best and OGQ is delighted to support him in his endeavors.

It’s time you played your part in creating future champions. We share the same passion. We want India to triumph. Come, become a part of OGQ. Come Join Us in our Quest for Gold.